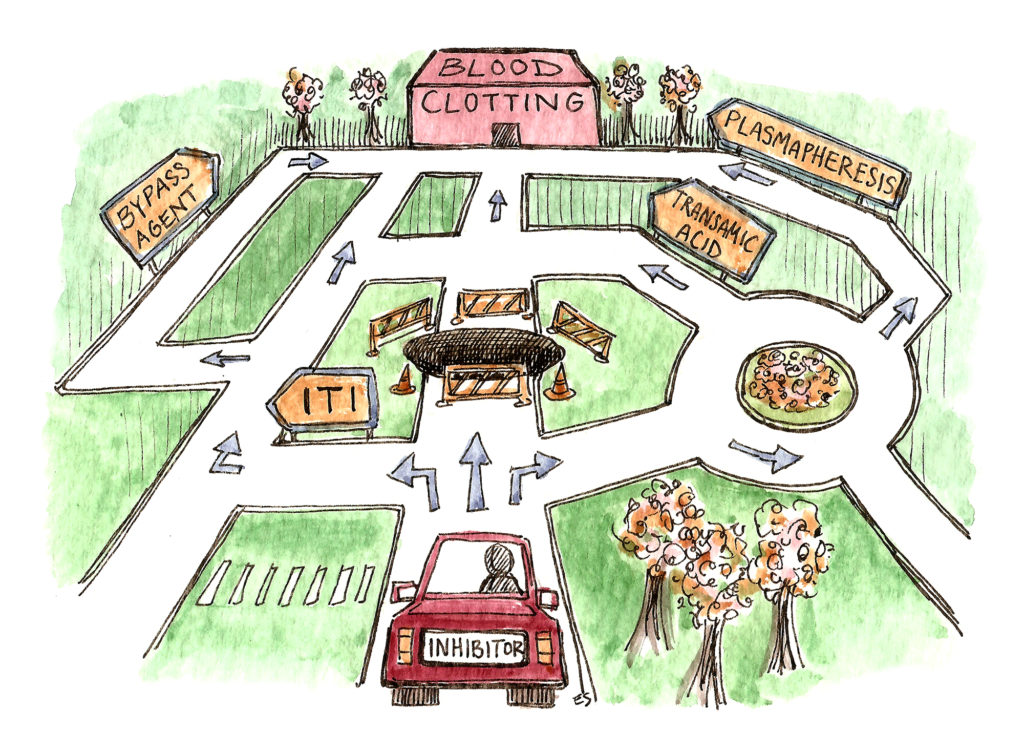 Non-replacement therapies for people with inhibitors
In 2018 a new treatment product was licensed in Europe that completely changes the landscape for people with inhibitors. Prophylaxis with emicizumab (Hemlibra ®, Roche) is now regarded as the optimal therapy in patients with persistent inhibitors. Clinical studies have demonstrated superior outcomes with this agent compared to previous treatment regimes with bypassing agents alone. The advantages of emicizumab are that it is given by subcutaneous injections at intervals of 1-4 weeks and enables a steady plasma concentration to be maintained (after initial loading doses). This novel therapy requires close supervision in haemophilia comprehensive care centres.

Bypassing agents
Currently, bypassing agents are the mainstay of prophylaxis and treatment of bleeds in people with inhibitors. Available bypassing agents, whose role is to work around inhibitors to promote clotting, are activated prothrombin complex concentrate (aPCC) (FEIBA®, Takeda)  and recombinant activated factor VII (rVIIa) (NovoSeven®, Novo Nordisk). Individuals with inhibitors may respond differently to each product, so it is desirable to have access to both.

Immune tolerance induction (ITI) therapy
ITI therapy offers an opportunity to eliminate inhibitors and return to standard treatments (such as prophylaxis with clotting factor concentrates), which become effective again upon disappearance of clotting factor-neutralizing antibodies. The therapy is demanding and involves frequent infusions of the deficient clotting factor over an extended period of time – months or even years – and could prompt the immune system to stop seeing the infused clotting factor as a danger and wind down the inhibitor release.

High-dose factor concentrate infusions
In low responders or high responders with currently low inhibitor titers, bleeds may be effectively treated with high doses of clotting factor concentrates. However, in the latter group this intervention will provoke a rise in the inhibitor titer in a matter of several days and will thereafter no longer work, requiring a switch to bypassing agents.

Plasmapheresis
Plasmapheresis allows to quickly reduce inhibitor titer in the patient’s plasma, which allows a temporary use of clotting factor concentrates to control bleeding before the inhibitor titer builds back up. The method requires specialised equipment that takes  blood out of the patient’s body to separate the plasma from the blood cells and extract the inhibitor from it. Therefore, plasmapheresis is usually only done before surgery or when bleeding cannot be controlled using bypassing agents.

Tranexamic acid
Tranexamic acid is an antifibrinolytic drug, which keeps the blood clot from breaking down and thus lowers the risk that bleeding will resume. Tranexamic acid does not stop the bleeding per se, so it cannot be used as a stand-alone therapy to control bleeding. However, it is a useful additional therapy, particularly in external bleedings from mucous membranes. It should not be used in combination with aPCC.

New ways of treating PWI are currently being clinically investigated. Contact the EHC or your NMO for more information.